Ray Aker - A Personal Appreciation by the Author

Ray Aker was a very quietly spoken and modest man. This nautical researcher had no equal. As a Drake scholar, he could even plot Drake's more mysterious movements through his nautical experience. It is easy to state that Ray Aker reconstructed Drake's route around the world, yet no other Drake author has even come close to doing so. Drake's movements were always lost around Tierra del Fuego and in the Far East. This was because authors lacked Ray's level of nautical experience and that the islands were unnamed and uncharted. Many writers confused the Argentinian ports of Puerto Deseado and Drake's Port Desire, as being the same place, because both place names mean the same. 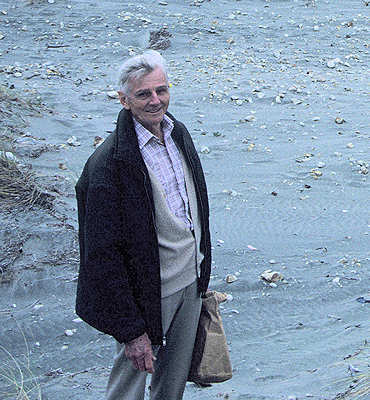 Ray was most animated when I returned from an expedition. I would usually report that his theories had become fact. He was most appreciative, when I told him that I had found the cleft in Vesuvius Reef. Ray was the first Drake scholar that I met who had a strong field study approach to Drake history. Our tribute to Ray would be to implement his suggested fieldwork. This included looking for: the silver bars near Nombre de Dios; the graves of Drake's men at Fort Diego, Panamá and Port San Julián, Argentina; Drake's lost anchors in Tierra del Fuego; the cannons on Vesuvius Reef, Indonesia and Drake's coffin. Ray wanted a plaque dedicated to Drake installed on Cape Horn. The plaque really needs to include Ray's unique research, that proved Drake the Englishman discovered and stood on Cape Horn.

My twenty year relationship with Ray was symbiotic, of which I was the main beneficiary. This was because Ray was the source of much of my work, especially on the world voyage. Without Ray I would not always have known where Drake was. Since I was to spend vast sums of money, time and effort to reach the vaguely and remotely located anchorages, I would intensify my enquiry to obtain absolute precision as to where Drake anchored. At Tierra del Fuego, for example, I did refine Ray's thinking. On a rare occasion, I would prove Ray's sleuthing to be incorrect. I also ensured that Ray's world map was complete, since he had overlooked Drake's pause at River Sesto in Liberia.

Ray's exquisite reconstructive drawings of ships and havens added the visual reality that history needs. Since Ray was an absolute perfectionist, he always delayed efforts to have his work published. Therefore I am pleased that this book brings Ray's achievements to a wider audience, albeit posthumously. I lament that Ray never saw our collaboration published; since he was my mentor and always in my thoughts, especially when I needed him most; in the world's most desolate regions. Ray's studies of Drake's life and voyages have appeared in several biographies. John Sugden wrote this under-statement in the preface of his second edition, "Ray Aker and his associate, Michael Turner, probably know more about the geography of Drake's circumnavigation than anyone else."

Thank you Ray; we've done it!