My Arguments for Finding Sir Francis Drake's "Cophin of Lead" 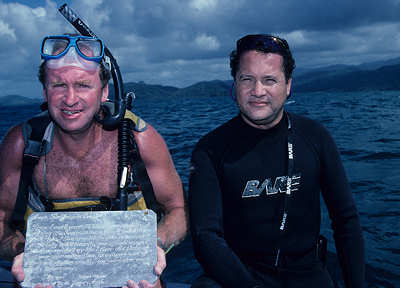 Michael Turner and René Gómez
with the plate of lead

Since 1980, I have followed Drake from the cradle to the grave. This has entailed photographing everything he saw and did in over thirty-five countries, at a personal cost of £70,000; two muggings; two arrests and a jailing. Consequently, I have a 11,000 slide film archive chronologically depicting Drake's life month by month. I have had published the first topographical illustrated biography. These five volumes uniquely record everywhere Drake went. For instance, no previous biography narrates every time the anchor was cast.

Like a possessive parent, I write as though I never want to let Drake out of my sight. I have followed Drake, to be able to see and touch his world, so that I can gain the fullest appreciation. Obviously, I have developed a spiritual affinity with Sir Francis. I have had to lead two men's lives. Parents who have lost their sons in war, grieve more peacefully when they know where their sons are buried. I desire to know the exact position on this planet where Drake has come to rest. The 400th anniversary of his funeral on 29 January 1996, gave me a less than a once in a lifetime opportunity, to be the first person to pay respects near Drake's graveside. In keeping with Drake's "Cophin of Lead", I delivered to the seabed an inscribed message on a plate of lead. I wore a Rolex Submariner diver's watch that Rolex awarded me for my enterprising efforts. Upon surfacing, I further realised that I had the unique credentials for finding Sir Francis.

People who promote this view are living in a world of double standards. A former curator of the Plymouth City Museum, who subsequently took up a post at the Manchester Museum, opposed the disturbance of Drake's casket. On BBC television news on 20 December 1995, there was an Egyptian mummy undergoing keyhole surgery in the Manchester Museum. This body was being disturbed. There are numerous mummies on display in museums throughout the UK, when these human remains ought to be re-buried in their country. Being gazed at by visitors is not allowing any human remains to be laid to rest. A BBC programme showed mummies in Chile being exhumed for laboratory examinations. The Egyptian Pharaohs are lying in the Cairo museum. 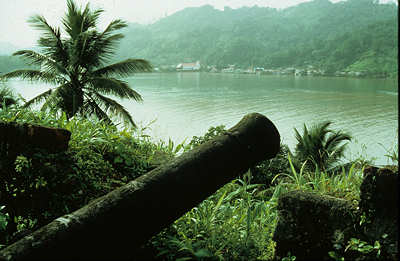 Portobelo Cove where Drake
was prepared for burial

In view of the above examples, I did not foresee such opposition to Drake's repatriation.

However, repatriation has never been the prerequisite to launch the expedition. I was always content to find, film, not touch and not disclose Drake's position. The government believe that once the expedition has left the field, Drake's confirmed presence would make him susceptible to being plundered. My answer is that the coffin could be found with the salvage vessel anchoring in many false places. Therefore, people on the headlands would be taking too many compass bearings. The salvage specialist Mr Martin Woodward stated that the coffin could be relocated to place Drake in a position of greater safety from any subsequent expedition. Here Drake could be at a depth only accessible to a commercial diver breathing mixed gases. This equipment does not exist in Panama. Mr Woodward has found the submarine Swordfish and has never revealed its position.

Finding the six feet long casket in the open sea at a depth of 125 feet is the biggest achievement, which in itself would make history.

Peoples' objections are superficial because they are founded on a very shallow knowledge base of Drake's life. These people need to read the thousands of pages written by those who sailed with Drake.

A Sea or Land Burial?

Drake's will did not request a sea burial. I have an actual size copy of the first draft.

"I bequeath my soule to Almightie God, my onelie maker and redeemer, and my bodie to the earth to be buried and entombed."

Cummins p256 wrote. "The earth was cheated of Drake's wish...Drake donned his armour, "that he may dy like a soldiour."

Drake buried his two brothers on an island in Panamá. Drake interred his long-standing faithful follower, Thomas Moone in Cartagena cathedral, Colombia, when on the same day the numerous common seamen were buried out at sea.

Nelson was not buried off Trafalgar but brought home. If Drake had lived after Nelson, and being the vainglorious, attention-seeker and social climber that he was, Drake would have wanted to be accorded the same honours as Nelson by being buried in a prominent location in Protestant England.

The Victorian Royal Navy in 1883, wanted to find Sir Francis. The Victorians would have repatriated Drake if they possessed today's technology. They were nostalgic towards the age of sail and empire building. Today in the era of political correctness, Drake's role as a logistician in the slave trade and his career as a privateer have created contentious discussions. Drake laid the first stepping-stones of colonization, which is also not in keeping with today's values. This may cause some to feel that Drake ought to be remain where he is.

However, Drake formed an affectionate alliance with the escaped slaves in Panamá. Drake knew that if it were not for the Blacks, he would never have robbed the mule trains, nor have seen the two oceans from the treetop, which inspired him to sail around the world. Drake must be judged within the moral values held in his day. The Spaniards described him as not very cruel. In the future, we shall controversially be judged by our attitude towards moral issues.

"There is no historical or scientific reason why Drake should be raised or removed. We have received no official request to move him from his final resting place and see no reason why he should be disturbed."

This statement does not say no. The Admiralty needs to be enlightened. I have outlined the historical reasons. The event itself would make history and be of benefit in Anglo-Panamanian cultural relations. The scientific reasons, in part, would necessitate the opening of the coffin. My views on this are neutral. Scientific examination could reveal Drake's height, blood group, DNA and the disease which killed him. 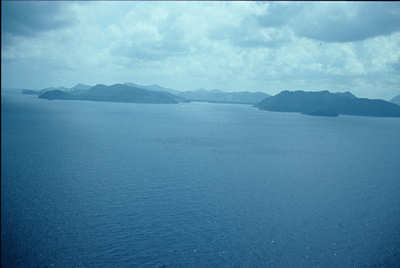 From surveys taken by Sir David Nicholas and myself, most ordinary people support repatriation. This was borne out by the vast majority of radio listeners in Devon and Cornwall in response to the BBC Devon 'phone-in after "In Drake's Wake" was broadcast. This view is in stark contrast to the Admiralty statement. Therefore, I feel that it would a be moral and fair compromise for the Admiralty to inform the Panamanian Authorities that they support, find, film, do not disturb and assurances that Drake's position would not be revealed.

The limited commercial success of this two tiered project of following Drake's life and wanting to find his casket, have been achieved by nurturing a long-held belief, from which I have never flinched, despite varying levels of interest and support. I have always been prepared to accept ninety-nine noes for every one yes. Thankfully, I am only in my early fifties and should have sufficient remaining years during which to search for information on Drake's life, both in the archive and the field. In Drake's Wake has become an important source for written and pictorial information. Since the Panamanian authorities support my expedition in principle, the idea of searching for Sir Francis will continue, since attitudes may change.