In 1998 Sir David Nicholas asked the late Ray Aker, president of the Drake Navigators Guild, California, if Ray could pinpoint the remains of Sir Francis Drake's ship the Golden Hind. Between 1577 and 1580 this was the second ship to circumnavigate the world and the first to reach Cape Horn. 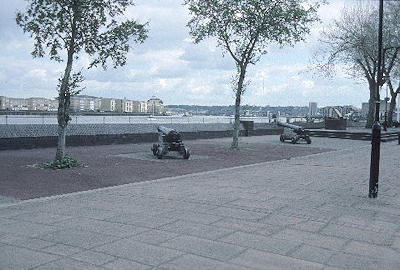 On 4 April 1581, probably at nearby Sayes Court, Deptford, Queen Elizabeth held the most extravagant banquet since the time of Henry VIII. She then boarded the Golden Hind, which was moored on the River Thames. She had Drake knighted on the main deck. The queen consecrated his ship as a memorial and according to John Stowe, in his Chronicles reprinted in 1592, ordered "His ship to be drawn up in a little crecke neare Deptford upon the Thames to be preserved for all posterity." Another contemporary commentator William Camden in his Annales of England 1615, which he began writing in 1596, adds that the ship was "lodged in a docke.".

Oppenheim, in A History of the Royal Navy wrote that the ship was placed in a dock and filled with earth. In the Navy accounts, only £35 8s 6d was expended for a wall of earth around her. In 1624 a new wharf was constructed by most likely building a new wooden wall on the outside of the original. Ray's drawings convincingly depict the scene. 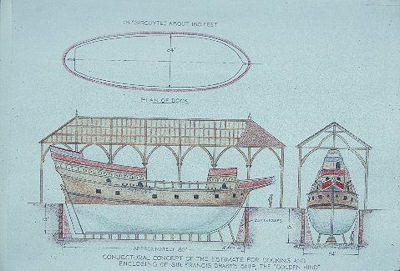 The creek is the key to finding the ship, but it was filled in during the 19th century and its exact location has been forgotten. This creek was on the site of the Tudor Royal Navy Dockyard which in 1742 became the Royal Victualling Yard. Ray Aker has discovered its most probable location from a curious zigzag boundary line separating Deptford and Lewisham. The boundary line makes no sense in the modern layout of streets, parks and buildings; but it does if it is the bed of the ancient creek because rivers, streams and creeks are frequently used for boundaries. The creek was filled in because its water was diverted for the Surrey Canal.

On the basis of Ray's new evidence, he expressed a wish that Sir David Nicholas, Michael Turner and Susan Jackson urge for an archaeological dig to recover the remains of the hull of one of the world's most famous ships. Ray Aker wrote to Michael Turner asking him to examine the site of the old creek, featured on his map, where he was sure the remains of the Golden Hind lay. Here Ray identified old structures on the riverbank that may have originated from the dockyard days. In May 2009 Michael discovered that contrary to Ray's expectation, there were no buildings over the site: only concrete and open ground. This was the best discovery for a straightforward excavation. The site lay inside Convoys Wharf, with old structures remaining on the riverbank. On the up-river side of the structures are river stairs that were more than likely built from the bed of the creek to save excavation. I had to scale a wall to obtain the photograph of the site through barbed wire. The indented stairs are on the left of the picture. 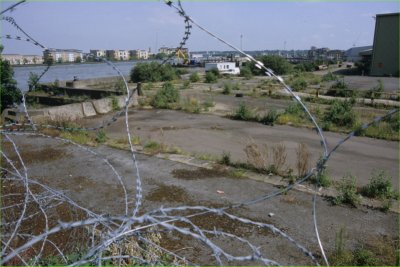 The site inside Convoys Wharf

A very significant part of the ship is likely to have survived because it would not have been entirely broken up, because the remains starting from just below ground level would have been left to stabilize the infill once the decayed ruins were covered over in 1668.

On Monday 25 July 1988 the Daily Telegraph reported that a pile of granite stones which once formed a cairn to mark the spot where the ship lay had been found in a derelict garage. They were "tidied away" in 1977 after a visit from the Queen and afterwards forgotten, with only attempted demolition of the garage bringing them to light. It was said that they were being taken care of by a local archaeologist who was hoping to return them to their original place of honour. This did not happen, so where are the stones and where was the cairn? Old dockyard plans may also show the exact location of the cairn. Since a chair and a tabletop were made from some of the timbers, it seems most feasible that once the ship was filled in and buried, cairns would represent a tombstone for this legendary ship. 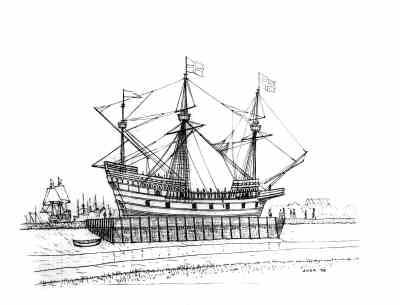 The Golden Hind at Deptford in an earth-filled dock

Susan Jackson argues that the two main reasons for searching for the Golden Hind are historical and aesthetic.

Our historical knowledge of the Elizabethan race-built galleon is superficial because it is only based upon reasonably accurate guesswork, since the Elizabethan shipwrights worked without plans. The Golden Hind was a purposely-constructed early race-built galleon. Contrary to the opinions of some historians, she was not French built but her keel was laid at Coxside in Plymouth and her completion was recorded in the Plymouth Black Book. Finding the Golden Hind will provide historians with much needed information about race-built galleons. We are not going to locate remains on the grand scale of the Mary Rose but preserved in the mud there will certainly be artefacts such as weaponry and domestic equipment. Most crucial of all, will be the Golden Hind's keel and her ironwork. This will tell the nautical historians what they have only been able to guess - they will know the length and breadth of the ship, from which her size and tonnage can be calculated.

Aesthetically this is not an anonymous galleon: but the Golden Hind, one of the most famous ships in English history. Initially the Golden Hind was a tourist attraction and was even used as a tavern. In the late 20th century, a silver model of her was used by Westward Television to front its programmes. Her image was used on the reverse of the old halfpenny, which is remembered by millions of Britons who used this coinage until 1971.

The world's eyes will be on Britain in 2012 and what better symbol could Britain have than a galleon which against all odds succeeded so gloriously in circumnavigating the world? The remains of the Golden Hind should be perennially displayed a mile down the River Thames at the National Maritime Museum, Greenwich in keeping with the wish of Queen Elizabeth I that the ship should be preserved "for all posterity".