For fifteen years I have been trying to land on Drake's Island in Plymouth Sound. Until 2010 no boatman was prepared to put me ashore unless I had official permission because since 1995 Drake's Island has been privately owned. In 1996 I was a studio guest on a BBC Radio Devon 'phone in. One caller was the locally famous owner, who told me on air, that if the island could be prepared for tourist use, I would be offered a job. By letter in 2008, I reminded the owner of our radio conversation and asked if I could be permitted to visit the island to complete my photographic quest. I received no answer. Susan Jackson telephoned the owner twice; he refused her request for a visit and she was told that unauthorised visitors would be prosecuted. I knew that the Royal Navy had previously maintained a radio mast on the island. Hence I made two telephone calls and sent a letter addressed to the commodore at HMS Drake, I received no reply.

In November 2009 I met youthful, strong-minded, sixty-nine-year-old, muscular Terry Birch who owned a pilot boat moored at Oreston. Like me, Terry had an ambivalent attitude towards officialdom. On 4 August 2010, in the rain, we slipped our mooring and soon circled the island ¬- just in case a less conspicuous landing could be achieved on the seaward side. However most of the island comprised cliffs and was surrounded by reefs: both of which prevent a straightforward landing. I had no choice but to climb the rusty ironwork of the dilapidated pier in full sight of people on Plymouth Hoe. As we approached, I was anxious to read the warning signs. To my delight they mentioned nothing about trespassing: rather the dangerous state of the ironwork that dates from 1939. 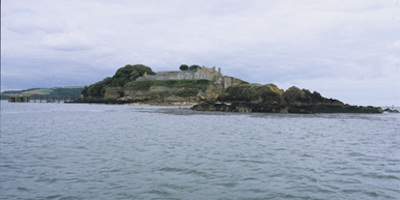 Drake's Island from the WNW

Once on the island I felt thwarted when I saw a locked gate in the fort's wall. I looked for an alternative route and I walked east until the cliff met the sea. I thought to myself, how on earth do I break into a fortress? I examined the gate and to my astonishment the padlocked chain had not drawn the gates close enough together to prevent me from slipping through. The ascending path reached the derelict army barracks where electric cables revealed the presence of workmen; whom Terry had noticed a few days earlier. I timed my passing by treading lightly, hoping not to be seen before I had taken any pictures. The next rain shower arrived as I crouched against the stone base of the wooden mast. I was unnerved when boatmen in red jackets kept patrolling in front of the pier. I thought they were waiting for me. I contacted Terry on my mobile telephone; he reassured me that their manoeuvres were coincidental. I kept Terry informed of my whereabouts using compass directions. The weather brightened and I felt more relaxed the further east I ventured, since I was out of sight of the barracks. I was then amid the walls of the 19th-century fort along with its guns and some of their empty emplacements. Frequently, views looking out from the island were either obstructed by trees or dense brambles shrouding the walls. In places I had to scale four feet high walls and jump over deep gaps for rewarding views.

I had imagined a network of mud and loose stone paths reaching all areas of the fort. Unfortunately I was wearing shorts and had to wade through long grass, brambles and swathes of stinging nettles. This greatly retarded footway ensured I would spend an hour on the island instead of a projected fifteen minutes. There were clear views looking south-west to the south-east. Views of Plymouth were just possible through the vegetation. I then swiftly walked within view of the workmen to a low route towards the north-east of the island. The route passed through a long and dark tunnel to an opening in front of the wall that afforded a clear view of Plymouth. I retraced my steps to the west. Again I was lucky to pass unnoticed on the south side of the dilapidated barracks to secure views looking north-west at the River Tamar.

As I was about to leave the island, a workman who was walking between two buildings called out, "What are you doing here?"

I had prepared myself if I were challenged. I replied, "I have come to see the owner, is he here?"

I responded, "The owner has given me permission to visit the island and will give me a job when it is open to tourism."

"Yes." I stated, but I did not mention that it was fourteen years ago!

I asked the workman when the island was going to open to the general public. He replied, "How long is a piece of string?" 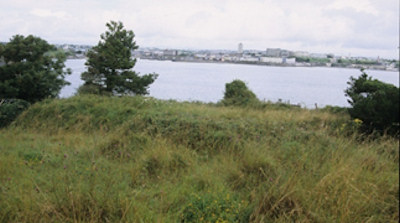 Looking north to include Plymouth Hoe

The workman agreed to let me take a picture from the north-west corner and one looking due north over the landing area to include Millbay. He was not interested in looking at my three Drake biographies, my picture on the front cover of the local newspaper and the BBC Radio Devon CD. I stated that I was ready to leave, since the island was so overgrown that productive photography looked too difficult. The workman kindly offered to open the gate. He then asked how I had got in. I replied, "Through the gate." After we passed through the gate, I hinted that nothing should be mentioned to the owner, since discretion was the watchword of my visit. The workman stated the owner did not encourage visitors. I felt that he and his workmate would say nothing, since the owner was not the type of man to tolerate the gates not being effectively locked. Terry, who had been cruising off the island, saw me approach the pier and instantly plucked me from the skeletal pier.

I kept looking astern to see if we were being followed. As my adrenalin rush was replaced with a gradual sense of relief and elation, I dangled my lower legs into the sea, which began twelve hours of trying to relieve the severe discomfort of being repeatedly stung and lacerated. My long-term thoughts were that I was willing to face prosecution for trespassing because Drake's Island was the last place in England that I had not visited. I felt that after thirty years of Drake-ing, I had more of a moral right to visit the island than just about anyone else. My enquiries had not been answered, so I had not received a written refusal. Furthermore I had a recording of the radio programme to defend my visit. Moreover the local press may have supported my incursion and focused upon the fact that Plymouthians were being denied access to an element of their history. I was disappointed that an island which has been named after Sir Francis Drake should have been allowed to fall into such a state of dereliction and disuse.

Records dating from 1135 name the island as St Michael, until its chapel of the same name was demolished for a new one dedicated to St Nicholas. Since the early 20th-century, the island is also known as Drake's Island. It lies 750 metres off the nearest coastline; excluding the reefs, it is 300 hundred metres long, covering an area of 6.5 acres and is ninety-six feet at its highest point. The island comprises cliffs and landing can only be effected on its north side.

Some local people question if Drake ever visited the island. We know that he anchored on its seaward side upon returning home from the circumnavigation. Throughout Drake's life, the island progressively assumed a defensive role. In 1583 Plymouth sent a petition to London requesting that their "verie friend and neighboure Sir Francis Drake" be appointed "captain of the isle of St. Nicholas." 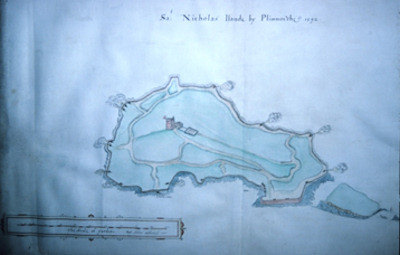 The plan of Drake's Island

It is not known if Drake accepted the title. Drake urged the government to build a fort on the island and offered £100, "for his parte at leaste," towards the cost. In Knox Laughton, The Defeat of the Spanish Armada, Vol 1, 202, we learn that when Lord Howard of Effingham arrived in Plymouth on 14 June 1588, he was forced to anchor in the Sound since there was no room in the Catwater, "nor betwixt the shore and the Island because Sir Francis Drake with four or five ships, did ride there." The Armada campaign had heightened the vulnerability of Plymouth to an unexpected seaborne attack. Plymouth petitioned the Crown to have Drake made their military governor. The Privy Council charged Sir Francis with fortifying Plymouth and the Sound - which he did in the winter of 1589-90. He had obviously compared the strength of Plymouth to the towns that he had captured or could not capture. Sir Francis organised the militia for the defence of Devon. Drake unloaded six large cannons from the Revenge to be installed upon the east side of St Nicholas Island that overlooked and protected the approach to Plymouth and the inner harbour. There were now twenty-three guns on the island. In the Plymouth Black Book we read about the fortification of Plymouth and Drake's Island for 1589-90 "...and the greatte platte forme by the gate att Iland, (Drake's Island) and the wall neare the same contayninge 257 fote was nowe newly made." The Crown had charged Sir Francis Drake with this civic task. Drake then took the first watch on the newly fortified island.

In 1592 government engineer, Robert Adams drew a colour plan of St Nicholas Island. It shows the gate and the wall on the north-west side behind the modern landing stage. However the Napoleonic fortifications have overlaid these Tudor installations. St Michael's Chapel which had been converted into a small fortress occupies the highest part of the island. Detached towards the west is a low rectangular wall with a gate on its north-east side. Inside there are four platforms. Fourteen cannons are placed around the island. In 2010 I walked over the island which sadly was overgrown and required the work of archaeologists to possibly uncover these treasured Tudor foundations. A week later on our boat trip sailing closely around the island, Susan Jackson pointed out what appeared to be one of the grey, stone artillery platforms which lay perched halfway up the NNE side of the island.