Drake was off the coast of Spain in 1589 leading an English Armada to vanquish the remaining Spanish ships that had made it home, after being battered by storms off the rocky coasts of Scotland and Ireland.

Drake captured the lower town and was repulsed at the upper walled town. The queen had not supplied the siege gun and the mines had not been effective, against such solid walls. Even the casual visitor to La Coruña cannot avoid learning about María Pita. Squares and streets bear her name, and signs direct the visitor to her house. In an era when it was more of a man's world, she inspired the inhabitants to stand their ground during the peak of the battle. Perhaps Drake was never aware that one of his most formidable adversaries was a woman! 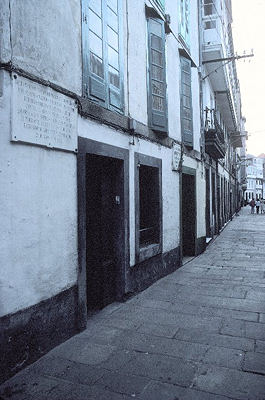 On the horizon
A fleet, enemy ships
Advances in iron formation.

Bugles are sounding
Bells are ringing
To the city walls!
To repulse the invasion!

The cannons spew shrapnel
The enemy attacks ferociously
Smashing down the defendants
Who lose their life and become worthless.

Within the city walls
In the blood and fire
Amongst the dead
You are searching for
The body of a beloved husband
The invader has just killed.

Tears of blood
The sword in your hand
You run towards the enemy shouting
"Women, children! We all must fight!
Oust the invader from our city!"

This exploit has passed into history
A woman and a city
María Pita and La Coruña
Already united forever, say freedom

Always united, they say freedom
María Pita and her city.