According to contemporary chronicler Edmund Howes, [Wagner, 305] master merchant mariner Drake was made purser, hence, a junior officer on a Hawkins sponsored voyage to Biscay around 1558. No details of this short voyage have emerged, except that Drake converted a Welsh Catholic named Michael Morgan or Morgan Gilbert to the Protestant faith.

Few authors mention this voyage and none have expanded upon it. Located at the centre and the most easterly point of this massive tempestuous bay is La Rochelle. The 10th century fishing village took its name form a small rock upon which it was originally built. Between 1132 and 1137 the town was freed from feudal protection and its taxes and given "liberties and free customs" to help populate the area.

The town was one of the foremost French seaports. Salt from the adjacent marshes and local wine made La Rochelle an important port on the Atlantic coast. From the 13th century the fortified port developed strong trading links with England and the Low Countries. Later it geographically faced the New World. The mercantile community became very independent from the rest of France. La Rochelle was naturally fertile ground for new ideas which from 1540 included those of the Protestant faith. By 1558 La Rochelle became the largest Protestant centre in western France. In 1568 the inhabitants opted for the ideas of the Reformation that led to a Protestant coup d'état on 9 January 1568. Between 1563 and 1573 Bibles and religious pamphlets were published in the town. Since they were followers of the Swiss religious reformer John Calvin, La Rochelle became known as the "Geneva of the Atlantic". All of this incurred the wrath of the Catholic loyalists, especially during the Wars of Religion (1562-1598). Soon after the 1572 St Bartholomew Day massacre and the 1573 siege of La Rochelle, French Protestants also known as Huguenots, were given refuge in England by Queen Elizabeth. Some Huguenots from La Rochelle settled in Plymouth's Southside Street, where according to the Plymouth records they had a meeting house. This suggests that Plymouth which was England's closest principal port to La Rochelle had already forged close commercial bonds with this isolated Protestant stronghold. Therefore it is more than likely that the immensely economically prosperous La Rochelle was a main port of call on young Drake's first voyage to Biscay. The town was in dire need of food, stores and military support during this period of Protestant reform. Drake was to return in 1569 for the same reasons.

Drake could have approached La Rochelle by sailing in the 1.2 nautical mile wide channel between the low lying sandy, wooded island of L'Île de Ré and the mainland, or skirted its ocean facing shore to the west and south. The town lies in a bay over a mile from the open sea. The L'Île de Ré to the WNW and the L'Île D' Oléron to the SW affords further shelter. 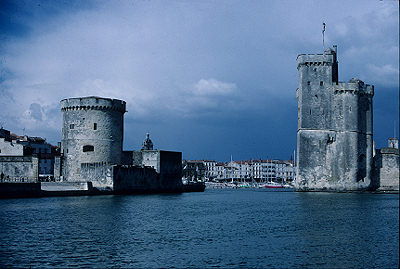 The entrance to La Rochelle harbour

Inter island ferries enable views of Drake's wake to be savoured without having to resort to private boat hire. Drake's passage through the outer harbour, a mile before the town harbour, is conveniently simulated from the wall of Les Minimes marina. Soon on his left Drake saw the 35 metre high Lantern Tower, built between 1445-1476 that served as a lighthouse and a prison. Later a Gothic spire was added. The tower is linked to the harbour mouth by a parapet walkway. This wall was built between 1352-1357. Drake would have noted the towers either side the 30 metre wide entrance to the town harbour made this the most spectacular harbour entrance that he would ever see.

During my visit in April 2006, St Nicholas Tower was closed due to pre-tourist season repairs. However once I had shown the Tourist Office my website, I was given a free two hour guided tour of the town and the keys to the tower. This military building symbolised the power and wealth of La Rochelle. Didier and I explored the dark corridors that were below sea level and climbed the maze of steps that led to the roof. Here we absorbed the gorgeous view of the sea, the harbour and the town, whose church towers provided me with a sense of orientation. A similar experience was garnered at the Chain Tower.

Ashore Francis Drake would have entered the town through the harbour side arch of the Great Clock Tower Gate. Its base is 14th century when it had two arches to filter pedestrians from traffic.

Immediately Drake would have seen the Renaissance house that was built in 1544. Drake would then have wandered along the arcade-lined streets passing the half-timbered medieval houses, some of which now have their timbers covered with slates. Some are still supported by porches and others have been replaced by arches, which when joined formed an arcade. There have always been shops at ground level.

The most picturesque of these streets is Rue des Merciers - Merchants' Street comprising at least five 15th and 16th century houses. Four fine examples stand together and there is one further along on the same side, typically supported by a stone pillar on its corner. The side of this house was much longer than its front. Another two-sided house but supported by a twisted stone pillar stands on the corner of Rue du Palais and Rue Dupaty. Diagonally across the road is another house supported by a leaning stone pillar that like the others seems to be yielding to centuries of weight bearing toil. There is a large 15th century house opposite the main market in Place du Marché. Next door in the cul-de-sac Didier showed me a 16th century doorway. I knew that I needed Didier's services if I were to photograph virtually every structure that pre-dated 1569. We then saw the 14th century house in Cour du Temple. A few metres away at 23 Rue de Temple is a house built in 1554.

St Bartholomew's Church was built in 1152 but only its 1568 bell tower remains. Likewise, only the Gothic bell tower of the sailors' St Saviour's Church remains since the church was destroyed during the Wars of Religion. This was a relief to me since the church was being restored. The scaffolding would have meant having to pay for a return visit. The surrounding wall of the Town Hall with its 15th century gargoyles on its east side and the 15th century east pavilion within was another notable landmark. In Rue des Augustins remains the House of Henri II, a part of which existed in the 1560s with its 16th century garden.

After research in situ, I left La Rochelle totally convinced that Drake had been here. This town was the most important undocumented Drake port of call that exists. Drake's presence in the area twice, during an era of religious upheaval, coupled with its trading and religious alliances with England, warranted its inclusion on my global itinerary.

Howes states that when Drake was two years older, he sailed to Guinea and two years later was commanding the Judith. However Drake commanded the Judith in 1567-8. Therefore Drake may have gained transatlantic experience at a younger age than is commonly thought. Hence the Biscay date could be wrong. We do not know in which year Drake sold his bark and sought his fortune with the Hawkins family in Plymouth. Sugden suggests 1564 because it closely precedes the departure of the 1566 Hawkins sponsored Lovell voyage, when Drake's movements become definite. 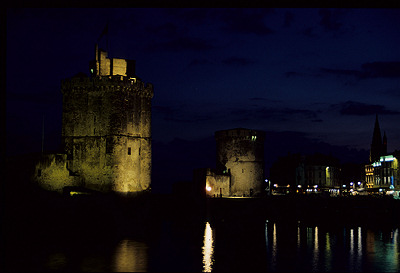 Looking outwards across the inner harbour of La Rochelle