Sir Francis Drake's Moral Behaviour Was Ahead of His Time

When Francis Drake was a teenager, he crewed on a trading ship operating out of the River Medway in Kent. Drake had the ambition to become an expert sailor. In 1578 on his world voyage he told a Spanish captive that there was no better sailor and navigator in the world than himself.

In 1565 when he returned to Plymouth, he naturally seized at the chance that his second cousin John Hawkins gave him to gain Trans-Atlantic sailing experience that involved collecting slaves in West Africa and selling them in the West Indies: countries that he had only heard of and a geography that he could only imagine. Drake sailed on Hawkins' last two voyages; the first made little profit and the last was a disaster due to the Spaniards killing many English sailors and sinking Hawkins' ships. Drake was bent on revenge. He became the first English privateer to plunder ships and settlements in the West Indies. Drake joined forces with the escaped black slaves who fought with him against the Spanish. If it were not for the help from these Cimarrones, Drake would never have struck it rich by robbing the treasure-laden mule trains that traversed the jungles of Panama in 1573. Drake became the first Englishman to work with black people as friends.

On the world voyage at Cape Blanco in Mauritania in 1578, Drake sought water and food from the locals. Since the Africans were suffering a shortage of food and water, Drake gave them some of his. 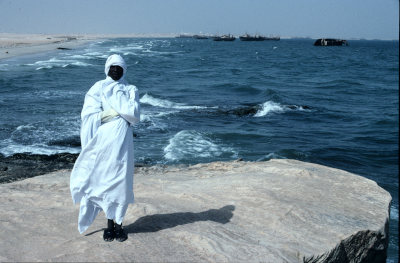 Here at Cabo Blanco, Mauritania Drake gave the locals some of his precious water

At Mocha Island in Chile, the Indians fired arrows at Drake and his watering party. Drake realised they had been mistaken for Spaniards; hence he departed taking no revenge, hoping the Indians would realise that they were from another country. 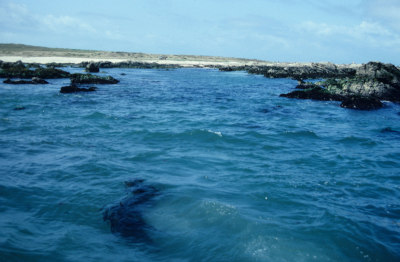 The creek on Mocha Island, Chile where the "Indians" ambushed Drake and his watering party

Off Cape San Francisco, Ecuador in 1579, Drake seized the treasure ship that Don San Juan de Antón commanded. Drake freed his slave, who preferred to remain with his master. Drake replied: "Since thou wishest to go, thou canst go with God's blessing, for I do not want to take anyone with me against his will." One of Drake's crew told Antón that black people were like brothers to Francis Drake and they had much affection for him.

At Guatulco in Mexico, Drake freed three black men who were being tried for conspiring to burn the town. One fled into the interior, the other two became crew members on Drake's Golden Hind.

On the West Indies voyage, in Santo Domingo, Dominican Republic in 1586, a Spaniard murdered Drake's black page boy. Drake hanged two Spanish friars. When the Spaniards executed the culprit, Drake cancelled more retaliation. Weeks later prior to the capture of Cartagena, Colombia, Drake ordered that any French, Turks or Blacks encountered in battle must be treated with respect. Drake freed 200 Turkish galley slaves. He did not send them into the interior but at his expense, brought them to England and repatriated them to Turkey. Spanish chronicler Vincenzo Gradenigo at Cartagena wrote that Indians and Blacks loved Drake and their homes were open to the English.

This list of lesser-known facts from the primary sources is naturally overlooked by the casual reader. After the slaving voyages of 1566-68, Drake's moral behaviour in the context of the 16-century should be quietly applauded. It gives us a balanced account that is suitable to be read at any of his statues.