Only from the pen of Derek Wilson in his book The World Encompassed published in 1977, do we learn of Drake's first foray into Hertfordshire. Whilst Drake was briefing the queen on his pending voyage to the Pacific Ocean, he joined her entourage on her second visit to the home of Sir Nicholas Bacon at Gorhambury. Bacon was Lord Keeper of the Great Seal to Elizabeth. She first visited him in 1572 when Drake was in Panamá. The house was situated three miles west of the hilltop medieval city of St Albans. Since Queen Elizabeth liked to be seen by her subjects, it is feasible that she, her courtiers and the likes of Drake passed through the city. Many buildings remain from Drake's day.

At the top of the hill in the city centre, adjacent to the market square is the Clock Tower built of flint between 1403 and 1412. The neighbouring shops in French Row date from the 13th century. In nearby George Street there is a large Tudor tavern and two medieval shop fronts. A little lower down the hill to the south-west is the Great Gateway of the Monastery built in the 1360s. In 1553 it served as a local prison. Adjacent to the east is the Cathedral and Abbey Church of St Alban that dates from 1077. All the present-day structure has existed since 1577 but the expansion of the west end is post Drake. The tower is built from recycled Roman brick taken from the ruined site of the Roman town of Verulamium , half a mile to the south-west. Verulamium is a Celtic name meaning above the marsh. Drake would have definitely seen the five metres high, ruined mortared flint walls with layers of red brick bonding, of this Roman city from its east side, as the entourage descended towards Gorhambury. The walls three metres wide at their base, with their walkways on top, date from 256 and 270 AD. Originally two miles of walls circled the city. There is a long stretch of wall on the south side and a short section on the east side of the ancient city. There is a well preserved and fascinating mosaic floor of a Roman town house that dates from 150 AD located only metres towards Drake's left-hand side. Beneath this tiled surface is an under-floor heating system that dates from 180 AD. These great masonry houses had a fine mosaic floor in their principal rooms.

Drake then passed the Church of St Michael founded in 940 AD. He had arrived from London along the famous Roman road called Watling Street that passed through Verulamium en route to Chester. Drake then followed Watling Street which entered the Gorhambury estate, where on his immediate left-hand side he must have noticed the columns of the Roman theatre, which has now become the only fully excavated Roman theatre in Britain. The visitor can see the foundations of the stage, theatre, seating banks and dressing room. 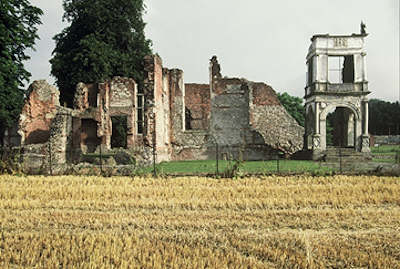 The remains of Gorhambury House

Two miles further west was Gorhambury House built between 1563 and 1568. In 1579 the mansion was inherited by Drake associate Sir Francis Bacon, philosopher and politician and his brother. Today the remains comprise a two-story porch, the clock tower, chapel and the great hall, built of brick, flint and rubble stone.

The undulating and open fields give a good idea of how Drake saw the landscape of the Gorhambury estate. The view upon returning towards St Albans was interesting as the cathedral provided an elevated landmark.