The Arrival of Drake's Treasure in London

I have always been fascinated to learn more about the route the treasure took to London after the Golden Hind had anchored at St Nicholas Island in Plymouth Sound. Biographers have never fully examined this episode and the geography has been totally overlooked. 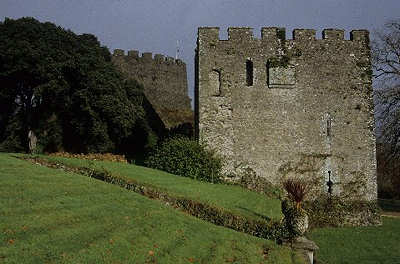 This was the home of Edmund Tremayne, formerly MP for Plymouth and now a clerk to the Privy Council. Tremayne was charged with the initial safe keeping of the treasure, before finally being registered in the Tower of London. In a letter dated 23 October 1580, Bernardino de Mendoza the Spanish ambassador in London, informed Philip that Trematon tower was guarded by forty men. 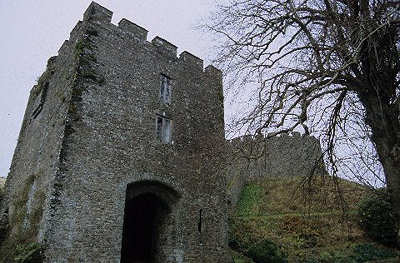 In 2008 I wanted to retrace the journey of the treasure from the Golden Hind's anchorage at St Nicholas Island to the castle. Susan and I hired a boat from Saltash and sailed from the island, now called Drake's Island up the River Lynher. An anchored Royal Navy ship in front of the creek that serves the castle proved the Golden Hind could have reached this position. Since the creek is very shallow and dries at low water, the bullion would have been ferried in boats and disgorged at the landing stage at Antony Passage on the west side of the creek's mouth. Ancient stones remain west of the modern small harbour. Shire horses and carts could have conveyed the treasure along the west bank mud trail and up through the woods to the castle. It is exactly one mile to the perimeter of the castle and an extra tenth of a mile to the base of the keep via the gatehouse.

In 1983 the tenant of the stone Norman motte-and-bailey castle very kindly allowed me to wander the grounds and along the battlements between the gatehouse and the keep for pictorial documentation. 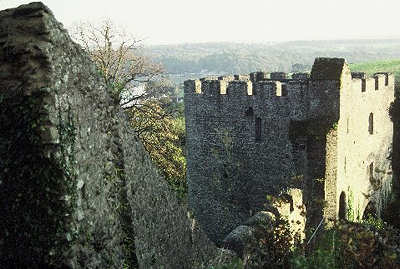 The shortest and steepest way up to the keep

Over the years my research and fieldwork had become more thorough. In mid-November 2008 I returned for extra camera angles and to ascertain where exactly the treasure was stored at the same time of year that Drake was most likely sleeping there. The current occupant Jonathon Bulmer graciously escorted Susan and me around the castle and left us to continue our exploration for the rest of the day.

We first examined the two-storied rectangular gatehouse that dates from 1270. On the second floor just inside the door was a most interesting tiny chamber called the garderobe. Drake would have used this long drop feature to answer the call of nature. Clothes were often hung in this chamber because it was thought that the intermittent odour deterred moths; hence the name garderobe. This was one of the few places on the Drake trail at home and around the world, where I was able to position myself to the exact metre where Drake had stood or in this unique instance, sat with his back pressed against the wall. In the adjacent main room was a 13th century fireplace. The rooftop battlements afforded views of the creek and the River Lynher. Due to the floors being of wood the treasure was not stored in the gatehouse but high up in the stone oval-shaped 12th century keep.

A path had been etched into the steep sides of this earth-covered rock cone, which spiralled in two directions around the hill to the arched gate. Men could have carried the bullion in leather bags, used horses to ascend in one direction and descend in the other. A human chain could have formed directly from the gatehouse the shortest and steepest way up to the keep. 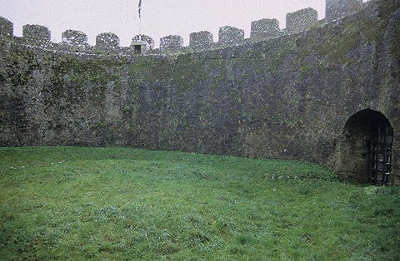 The interior of the keep

As I passed through the arch, I knew that I was literally in Drake's footsteps. At long last I was looking at where Drake had stored the treasure from the world voyage. I did not just want to touch the racing pulse of history, but I personally wanted to recall all the places that I had adventurously reached around the world, where Drake had loaded the treasure and cloves. My intimate approach continued with the use of a steel rule. The base of the wall was three metres thick; the two widest internal diameters were seventeen and nineteen metres. Since the wooden stairs no longer remain, I used the steel ladder to scale the nine and a half metre wall to the battlements. Just beneath the battlements were the corbels. These abutments and square holes once supported a wooden roof.

As Tremayne would have escorted Drake around his property, Drake would have seen the sallyport, where the defendants could flee through a narrow arch in the curtain wall - much of which remains, especially on the south and west sides. Tremayne's residence has disappeared, probably beneath the foundations of the current Regency house.

Early in October 1580 Drake, along with armed guards, led a train of pack horses, bearing a sample of treasure for the queen to inspect. Elizabeth spent six hours listening to Drake's account of the voyage.

Henry VII had built the palace on the east bank of the Thames in 1501. There had been a royal residence on the site since 1126. Little of the palace which is thought to have occupied twenty-two acres remains. The remaining gatehouse with its original double gate hinge pins, adjacent rooms and exterior walls has changed little since Drake's day. The arms of Henry VII adorn the gate's arch. On the left, as one enters the courtyard, there is a row of Tudor houses called The Wardrobe. These were originally used to store soft furnishings for the palace. This northernmost section of the palace commands a clear north-easterly view over Richmond Green. On an all weather information board on the other side of the green we learn that the green was the royal entertainment venue for jousting. On the green near the gatehouse we are informed that Queen Elizabeth much frequented Richmond, especially at Christmas, and died here on 24 March 1603.

Drake returned to Plymouth on 23 October.

The Queen had given Tremayne secret oral instructions that Drake was to extract at least his £10,000 share alone and unaided, along with £14,000 for his crew.

During early November the bullion was carted downhill to Antony Passage and conveyed aboard the Golden Hind down the River Lynher and across Plymouth Sound to Mountbatten Point. Here the slow land journey to the Tower of London began. Much of the treasure was carried in leather saddlebags on packhorses and some piled into covered wagons. Trematon Castle to London via Mountbatten Point is a slightly shorter route than if the mules left from Plymouth. One may rightfully wonder that since the treasure was sailed halfway across the world, why it was not conveyed to London aboard the Golden Hind. Intense secrecy surrounded the value of the treasure; therefore Elizabeth could claim that the actual amount stated by the Spanish Ambassador was an exaggeration. Hence the journey by land would conveniently and clandestinely enable bullion to be siphoned off.

The location of this substantial property was probably instrumental in the route starting at Mountbatten Point because it was where Drake and his crew's shares were to be stored. This was then where the first portion of the bullion was off-loaded. This mansion would also have been a secure position, from which to subsequently pay-off his crew.