Drake-ing to the Gates of Hell

Since 1980 I have photographed nearly all the places in the world that Drake visited. Drake-ing can be an enjoyable leisurely affair such as ambling around Tavistock, taking a coffee before visiting the site of Drake's birthplace at Crowndale Farm. Here one is right in the epicentre of Drake's world. Conversely there are locations that are remote which Drake may have visited. Reaching these areas can be utterly problematic and unpleasant. However these areas have to be included to cover all eventualities to encompass all Drake's life. 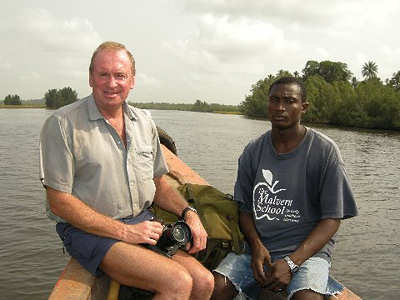 I spent the 2008 school Christmas holidays Drake-ing in Guinea and Sierra Leone. The mission was to sail up six rivers in Guinea and two in Sierra Leone. I had already visited the four rivers in northern Sierra Leone in 2007. The expedition objectives were realised at a staggering cost of £2,900. This final expedition to Black West Africa ensured that I had seen every river that the 1567-8 Hawkins' expedition had entered. This is the only Drake voyage where we lose sight of his position because Hawkins was despatching boats to several rivers often simultaneously. Drake could have spent most of his time commanding a large ship well away from the shoaling coast. Being a proactive sailor looking for experience, he would have sailed up some rivers as he did at the River Cacheu in Guinea-Bissau. All the rivers are still lined by mangrove forests and fields which support human activity. Photographically most of the rivers looked the same.

All the rivers were scoured for slaves. Only four out of twelve rivers south of present day Conakry were named being the Calowsas, Casteos and Lengarrame. The fleet was to rendezvous at the latter. These rivers were mainly in Guinea and one at least could have been in northern Sierra Leone. From the anchorage in Sierra Leone at modern day Freetown some smaller vessel were sent south to the "river of Magrabomba." Only this river can be identified as the Sherbro River ninety miles to the south. This was the last place Hawkins searched for slaves before sailing for the New World.

At Conakry the capital of Guinea for $500 I hired a 40 feet long wooden pirogue to sail up six rivers along 40 miles of virtually uninhabited coastline. At the end of the first day, we spent the night at a beach-side hamlet of ramshackle huts, where no white man had slept in the last six years at least. I slept in a hut on a mattress of woven twigs, used buckets for a shower and ate fish and crushed peanuts. Unknown to me at the time the president died. At the end of the next day I had managed to photograph the remaining two rivers in Guinea and alighted at Benti near the border with Sierra Leone.

Benti disappointingly transpired to be a collection of houses in a forest. There were no cars, shops, guesthouses, electricity or running water. I was kindly given a bed in a private house but was rudely disturbed by an officious village chief who demanded to know who I was, why I was there and what I was doing since I was well off the beaten track and was a white foreigner. After reluctantly producing my passport to this civilian, I was ordered to get dressed and sit outside facing a panel of civilian officials, each shining a torch to combat the intense darkness. The language barrier stunted all communication. I realised that I should have obtained a diplomatic letter from the Guinea Embassy in London explaining my mission in French. These letters had proved vital in the past. I was handed over to the army. I sat on the back of a motorcycle and was taken to a guarded stone hut and made to sleep on a wooden platform. I was awoken at 5am by the radio which I learned later was announcing a military coup.

I was able to request a bucket of cold water to attend to my personal comforts and resorted to my emergency food supply - muesli and powdered milk. Soldiers seemed to be arriving in ascending order, each examining my passport. When they had arrived, they all huddled around my passport, which had never received so much scrutiny. The passport was crammed full of visas which should have indicated the innocent nature of my presence. I became apprehensive when my passport was more than twenty metres away from me. I now thought I could be detained for days and nobody would know where I was. An officious little soldier trying to impress his superiors at my expense, ordered me to exhibit my entire luggage. After two hours the officer in charge read my flight schedule. He understood my status as a traveller and released me in style. The same soldier as last night conveyed me on the back of the motorbike to the border along the twenty-five miles dusty track, but not before he explained to the village chief the outcome of my detention. He then shook my hand. I had to produce my passport at several army checkpoints which maintained my feelings of unease and haste.

The road journeys in Sierra Leone were like Guinea, along dry, dusty, mud and stone rutted tracks. With the temperature at 31° celsius accompanied by high humidity, the perpetual discomfort of dripping sweat was exacerbated by an increasing covering of red dust. I hired a boat for $50 an hour for a two-hour trip to document the River Bunce immediately east of Freetown. We were lucky not to drift up-river into a remote wilderness when the fuel ran out. We were able to paddle up a creek where one of the men walked to refuel the portable tank. Even then he tried to charge me extra for the hour of delay.

The eight-hour journey covering 200 miles to the remote riverside village of Matru Jong was a hot and dusty ordeal, where adequate food became an issue. I washed myself and my clothes in the glorious river. I went to bed content, knowing that next morning the village council pirogue was to convey me four hours down-river and out to sea to photograph the "Magrabomba" River for a reasonable $150. I slept in a cosy guesthouse but had to get up at 2am and douse myself in water to stave off the hottest night of my life. People lived in mud huts in this, the poorest country in the world, yet some wore Manchester United football shirts emblazoned with the name Rooney on the back. Here were the poorest people on the planet associating themselves with one of the world's richest football clubs. After documenting the Sherbro River, I slept on Sherbro Island in a shell of a guesthouse with a mosquito net as the only semblance of comfort, apart from buckets of water. To my great sense of relief, all the photography was finished. I am the only person in the world to go Drake-ing on a world scale but carry a huge cross for the decision I made in 1980. I thought about how remote all the places were and how one needs to have a great sense of nerve and confidence to be alone with a language barrier, surrounded by grinding poverty with its attending primitive conditions, lack of comforts and extreme wet heat. In addition I had to be very careful in my dealings because some men always sought ways to demand money from me.

On the way back to Freetown I agreed to pay a car owner $33 for a 150 mile ride to Freetown. Obviously I was paying more than the four locals crammed into the back seat. He stopped to have a puncture repaired. He then changed his front wheel. This tyre then burst. He restored the original which ruptured. In the intense darkness the driver made me pay him 80% of the money. This contravened our agreement that I would pay upon arrival. I had no choice since in his desperate financial state he would not let go of my rucksack. He took a ride in a lorry hoping to buy a new wheel late at night over twelve miles further on. I was lucky to enjoy a free ride to Freetown where I tipped the driver, so ended up paying 90% of the original fare. A few days later I walked across a garage forecourt, when I noticed a taxi speedily circling the pumps. If I had not ran out of the way, I could have been killed.

Almost for the entire journey I was anxious about how I would fly home because Air France had cancelled some of its flights to Guinea due to the military coup. I clarified my knowledge with help from the British Embassy who connected me by telephone to my travel agent in Bristol. Subsequent e-mails between us gave cause for optimism. To avoid the sweat, dust and repeated demands for my passport at army checkpoints, I flew to Conakry, where the situation was stable but uncertain. The embassy advised against all but essential travel to Guinea. Soldiers were supervising where the public would be in large numbers such as at the airport and even in the best hotel in the country. Here whilst waiting eight hours for the plane to France which would whisk me back to paradise: a land of luxuries where one can dress to maintain the ideal body warmth, I lashed out on food and relished hours immersed in the pool.

However Hell still followed me. Due to snow and fog in Paris the flight to Bristol was delayed for twenty-six hours. There are always hundreds of confused passengers, queuing hours for vague information in crowded conditions. It was a delight to land in Bristol but as I half expected, my rucksack, like 30,000 other pieces of luggage did not arrive. However I reached the comforts of my mini palace clutching thirteen rolls of slide film which, if they result in well exposed slides, will ensure that I never have to return to the harshest area on the planet.

In the 1980s I was unjustifiably jailed in Guatemala for three days and in Colombia robbers slashed my ear with a switchblade. Long time society member, Geraldine Griffiths once called me "inexhaustible". To finish Drake-ing, I "only" have to photograph three capes in Morocco and the raging seas around Cape Horn and Tierra del Fuego of Chile. I hope my energy and money will see me through.