Rendering to film everything Sir Francis Drake saw can be an exhilarating experience or the pinnacle of anxiety, boredom, discomfort and disappointment. Typically I hitch-hike, catch buses, trains and aircraft to reach a Drake area. Boat hire is usually straightforward. Photographing parts of towns and cities often entails revisits due to scaffolding or some buildings such as churches being closed. The highlights have provided unforgettable and unique experiences. I have seen parts of the world scarcely seen by others, such as the westerly point of South America, uninhabited and remote islands of Indonesia. I have hired taxis, cars, 4x4 vehicles, horses, helicopters, microlight aircraft, light aircraft, a 43-feet cutter and an ocean-going tug. Some boat and plane hire have been repeated due to poor visibility. The costs can be enormous. There have been some free rides that have saved a lot of money. Court Helicopters flew me around the Cape of Good Hope; a Spanish ship gave me free passage from Mauritania to Gran Canaria. The likes of the late Bert Kilbride and Ray Aker and society member René Gómez have provided complimentary transport and accommodation.

The downside for physical discomfort has been in West Africa. The grinding poverty with its attendant lack of comfort and humid heat are fortunately behind me. The mental discomfort has been the worst in the Sahara region of Morocco. Before 1975 Capes Boujdour, Rio del Oro and Barbas lay within Spanish Sahara. When the Spanish left, the territory was annexed by Morocco. This resulted in an armed struggle by some of the indigenous people, known as the Polisario Front, who call their land Western Sahara. The area has remained a military zone, full of road checkpoints. It was idiosyncratic for a European traveller to attempt to hire a boat. Uniquely out of forty-two countries and four overseas dependencies, I was never allowed to enter a fishing boat and thus denied documenting Capes Boujdour and Barbas. At least in Cuba the army were helpful and provided a daily escort. In both countries virtually all boats were government owned; the use of which was supervised by the police, army and navy. Twelve years after these frustrating experiences, in 2009 I spoke with the Embassy of Morocco in London. They stated they did not write letters of introduction, and due to the more relaxed situation, I did not need one because I would be able to hire a boat. The embassy was an exception in not replying to my letters and supplying a letter of introduction. I was not surprised to realise the situation on the ground had not changed.

Cape Barbas is near the border with Mauritania and transpired to be a wasted 600 kilometre journey. I spent a boring six days in a basic desert hotel near the cape waiting for authorisation that never arrived. No official was prepared to take the responsibility to sanction a simple and harmless request. I find this denial hard to accept. It was made worse by the waste of preparation time, money and knowing that if I had photographed the two capes, the entire African continent would have been totally Draked. In 1989 and 2009 I had succeeded at Cape Rio del Oro because it is close to the tourist town of Dakhla. The only consolation is that due to me telling the management many Drake stories, the hotel has been renamed Hotel Barbas-Drake. The Lonely Planet guide book for Morocco will include this new hotel. 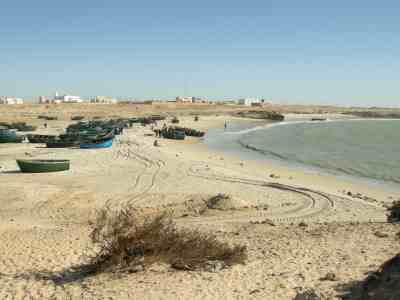 Government boats for hire? at the Barbas fishing village 10 miles from the Cape 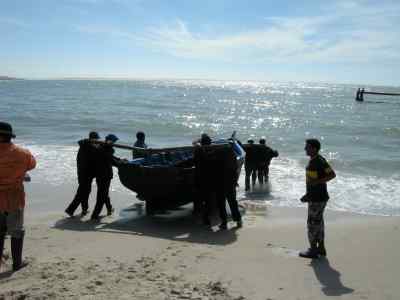 3pm Christmas Day, 2009 - This much awaited launch was aborted as soon as we were afloat

I estimate that after exactly thirty years, I have photographed about 98% of Drake’s life. The remaining places are: Punta Santa Helena and Cojimiés in Ecuador; a trek in the region of the tree in Panamá from where Drake saw the two oceans and what I knew from the onset would be the final challenge - that of the Cape Horn region. Money is the only obstacle to surmount, which in some ways is easier than the bureaucratic barriers found in the Western Sahara region of Morocco. The cross that I began to carry in 1980 is becoming a heavier burden.