Three Decades of In Drake's Wake

My project to illustrate Drake's life in 35mm slide format began in 1980. The original criterion was to photograph every place Drake anchored and visited on land. Over the decades a greater degree of thoroughness evolved. The late Ray Aker of the "Drake Navigators Guild" had tabulated the geographical points of Drake's world voyage and included landmarks noted in passing. Working with Susan Jackson lead to including buildings that Drake would have seen in England and the contents within some, such as a font and piscine. Before the pursuit of this superlative detail was conceived, I thought the project would be completed by 1995. Then there were return visits around England and the world for extra angles; for example to include approaching and departing views, which I had overlooked and rough seas that aborted previous boat trips.

The slide archive has transcended 13,000 photographic images. A typical collection was garnered during the Christmas holidays of 2010 in Chile, Perú and Chile. Only from da Silva's pen do we read of islands noted in passing in Chile and Perú. After anchoring at the Pájaros Islands in Chile, four other islands were recorded. These were not named but three are huddled together being Islas Gaviota, Choros and Damas. Isla Chañaral 14 nautical miles further north is clearly visible. The islands that form a national park are densely populated by sea lions, Humboldt penguins, sea otters and pelicans. Fortunately for me, they attract daily visits by small parties of eco-tourists. Typically one mini bus a day arrives at Choros. Due to no buses I had hitch-hiked to the village along desolate, loose stone roads through the Atacama Desert - this is the driest in the world. It was a delight to share the cost of boat hire. I arranged to pay treble the individual price for the boat to sail further away from the islands to photograph Drake's bow and stern views. The other passengers benefited from a longer excursion, since they also studied the islands from up close. I repeated this arrangement at Pan de Azucar. This conical island 1.4 km off the mainland and is a unique looking landmark teeming with wildlife. [Turner, In Drake's Wake, Vol. 2] 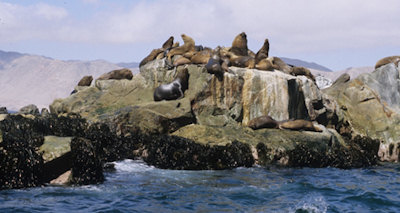 To my annoyance I had overlooked three places mentioned in the World Encompassed. I needed to record Drake's brief anchoring at Mejillones where he traded with the indigenous people who were governed by two Spaniards. I joined an Argentine media crew who had hired a large boat to film eco-tourism off Punta Angamos. This enabled me to sail further than I would have done, so I could follow Drake into the port for a mere £20.

In Perú it was third time lucky to photograph the arrival and departing views at Isla San Gallam and to ascertain along which side the Golden Hind had sailed. Da Silva had observed the little sugar loaf in the middle of the lofty island, which can only be seen from the east. I would not have noticed the sugar loaf but he must have been sensitive to his recollection of the most famous one of them all at Rio de Janeiro. My first visit in 1987 was aborted after taking only one adequate picture due to a lively sea. In 2006 mist covered the island for the day as I arrived. In 2010 I had to settle for the services of a greedy boatman to the tune of £177 for three hours in a little speed boat.

Field studies enabled me to deduce that Drake usually sailed along the east side of the islands, which was the sheltered side for landing in search for birds. These could only be penguins which were easily captured. Some jumped into the sea but many waddled up into the island to their nests. They laid their eggs beyond the reach of the sea otters. Once inside their nests, the birds were dragged out with a barbed hook and bludgeoned.

Since 1981 my six attempts to photograph Drake's at Callao were always frustrated by the navy. However each visit was met with lesser restrictions. In 2006, I was able to hire a boat to photograph the entire harbour but no boat was prepared to enter the Boquerón Channel to the south. Over time I am always hopeful of useful economic development. Since 2007, every Friday, Saturday and Sunday a large boat conveys eco-tourists around Isla San Lorenzo, albeit in the opposite direction to the passage of the Golden Hind. Luckily I only had to wait one day to fulfil a long-held objective for only £24.

In Ecuador I needed to photograph Punta Santa Elena which the World Encompassed noted in passing and the River Cojimíes. The former was the first significant landmark in southern Ecuador. The high trapezium-shaped point contrasted so sharply with the immediate flat coastline, that from the south it resembled an island. It was at Cojimíes, where, Drake momentarily hanged a ship's clerk upon suspicion of withholding treasure. [Sugden, 127] Boats were affordable and easy to hire in Ecuador.

This Drake expedition took nineteen days without any breaks. I covered 2,700 miles by road - over half was by hitch-hiking from 33° south to ½° north.

Drake's wake in England is now complete. The first two remaining overseas expeditions are finishing touches in Western Sahara and Panamá; then to break new ground and my wallet - yacht hire in Tierra del Fuego!