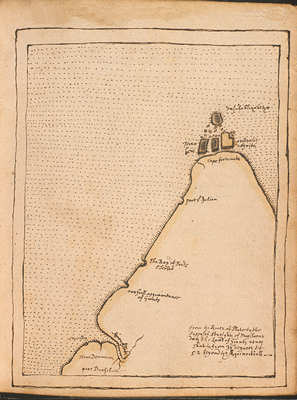 Horn Island as drawn on the voyage

Since 1980, I have travelled in over thirty-five countries photographing the movements of Sir Francis Drake. This has entailed backpacking and hiring: jeeps, boats, helicopters, light aircraft and horses to document everything Drake saw and did. To complete my quest, a journey of a lifetime remains. I need to charter a yacht in Punta Arenas, Chile, to retrace Drake's route from the west end of the Strait of Magellan down to Cape Horn.

After exiting the Strait, Drake was blown south, off course into the open sea. A month later, he regained latitude to reach Nelson Strait, seventy miles north of the Magellan Strait, before being blown from one anchorage to another SE down to Cape Horn.

This coastal passage of Drake's world voyage has been the most difficult to reconstruct. I owe my knowledge to the late nautical researcher, Ray Aker, President of The Drake Navigators Guild, California.

Since Drake was the first navigator to coast SW Tierra del Fuego and to discover Cape Horn, none of the islands were named. Therefore the primary sources only recorded approximate latitudes, dates and geographical descriptions.

Narrating and photographing Drake's journey would enable me to complete my project: In Drake's Wake. Therefore, all Drake's movements at home and abroad would be complete. This would represent a unique body of work: a geographical approach to history. My voyage should fascinate a wider audience because I would be graphically narrating a journey through the world's most hostile seascape to the "end of the world." Ideally, I would need to be in situ from 10 October - 7 November to capture the same weather and record the seasonal vegetation and water supplies.

The expedition would culminate in searching for the carved stone that Drake left on Cape Horn. This would add further proof that the Englishman Francis Drake first discovered Horn Island and not the Dutch as The Times acknowledged on 11 August 1997. 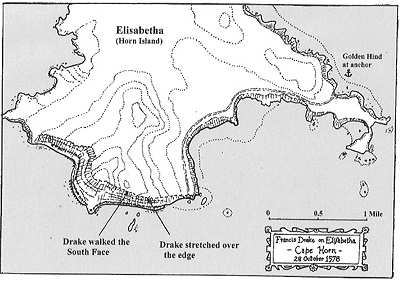 When Drake stood on Cape Horn, he saw an open sea; realising that the Atlantic and Pacific Oceans joined. This was a monumental discovery that Queen Elizabeth ordered be kept secret. Therefore, Drake was denied the credit for his discovery. English ships now could penetrate the Pacific Ocean without having to enter the Strait of Magellan that the Spaniards would later attempt to fortify. Drake's general presence is acknowledged because this stretch of ocean is now called Drake Passage.

Drake realised that he was writing history. With compass in hand, Drake laid himself above the island's most southerly cliff and told his men that he was the only man to have been at the world's most southerly point. Just like Drake, I would like to prostrate myself on the cliff edge of Cape Horn. If Drake's discovery had been publicised during his lifetime, the island and cape would now be called Elizabeth, just like the island that he discovered in the Strait of Magellan. The audience would be exposed to Drake as the explorer and highly skilled seafarer and not just a slave-trader turned privateer.

In 1990, I chartered a yacht to document Drake's passage along the coast of Argentina and into the Strait of Magellan. Frenchman Pascual Grinberg skipper of the high latitudes, would be prepared to convey me to Cape Horn. Yacht hire can be arranged through the agency Croisieres Australis based in France. Due to my contacts with the oceanic community from my two visits to Punta Arenas, I could also re-employ Conaf a maritime company that conveyed me to islands in the Strait of Magellan. Perhaps the media would like to enlist the help of the Chilean Navy. On one of their routine visits, they took Michael Palin to Cape Horn. All the sailors involved, would add interest to the story, since they are frequently operating in Drake's wake. Some would accompany me ashore as we explore the other rugged islands upon which Drake searched for water and provisions.

The three weeks' voyage in a chartered yacht would cost around £3,000 per person. To minimise risks, as before, we would shelter in Drake's anchorages during stormy weather.

To enhance the purpose and interest of this expedition, I intend to unveil a bronze plaque crediting the work of Raymond Aker. He proved that Francis Drake first set foot upon the island and the cape. The plaque could be erected above the main anchorage. This would interest the yachting fraternity and cruise ship passengers who frequent this infamous part of the world. The unveiling ceremony could be attended by the Drake Navigators Guild, the Drake Exploration Society and Chilean dignitaries.